The Biggest Brown I Ever Caught

When the drama ended, the biggest brown I’d ever caught was in the canoe with me. I wish I had the entire spectacle on videotape.

I was on a public fishing lake in the surprisingly rugged northwest corner of metropolitan Nashville, Tennessee, barely 20 miles from the state capitol. Hidden in the hills and hollows is Marrowbone Lake, 80 acres of deep water that hides holdover trout from winter stocking efforts, plus plenty of basses, bream, crappie, and catfish.

I’m a fly-rodder, and small- to medium-sized fish are what I usually catch. Bream and bass are common, and trout are a thrill. Landing any fish as big as the one I caught that fine spring morning was a thrill and a shock.

My rig doubles my chances. I use two flies. I tie on a popping bug and then attach another 18 inches of tippet for a wet fly. (I’m particularly fond of Ligon Bream Killers for the wet fly. One piece of yarn and four white rubbery strands that approximate insect legs, I suppose.).

Something hit the wet fly hard. Really hard. The fish went deep. My first thought was that I’d hooked a big bass, but visions of a nice trout bounced into my mind. 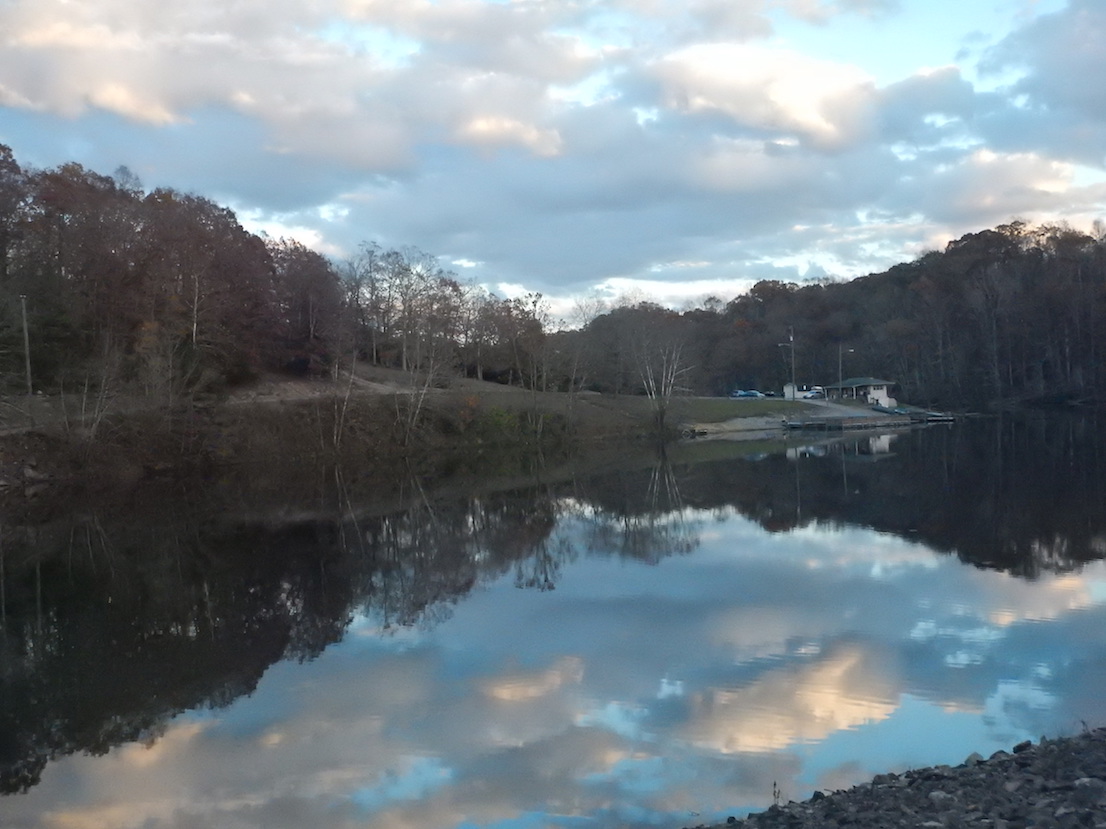 I was by myself in slack water, and the fish was big enough to pull my canoe around. The fish was like none other I’d ever hooked. I struggled to keep it away from the entangling branches of a tree that had fallen into the water.

I’m glad I had witnesses. Fishermen in a nearby boat stowed their rods to watch the fight. They eased their boat toward me, and the fish pulled my canoe toward them.

“Want me to net it when I can?” one of the spectators inquired.

I soon doubted my decision. I was making no headway, and the tippet I was using was only a two-pound test. My thoughts turned dark.

“This fish is going to break the tippet, or my connecting knot is going to fail,” I said to myself. I was remembering a huge rainbow I’d lost on Eagle Creek in Great Smoky Mountains National Park. This fish was much bigger, and I was losing confidence.

Finally, I was retrieving more lines than I was losing. I looked plaintively at the guys in the boat and said, “Net it if you can.”

I maneuvered the fish toward the boat, and one of the occupants made a stab with a landing net. He missed. My heart sank.

Another stab and the thrashing fish were in the net and out of the water.

The guy with the net said he had a digital scale, and he offered to weigh my fish.

“Go for it,” I laughed, and I watched the scale’s readout jump to four pounds and two ounces.

I took the fish from the net and laid it at my feet to remove the fly. A scrap of yarn on a tiny piece of barbed steel had enticed this behemoth. It was big and brown and beautiful in its own way – but definitely not the trophy trout I had fleetingly dreamed of.

I eased the fish over the side of the canoe and back into the cool water.

After all, why would I keep four pounds and two ounces of carp?

(Adkinson fly rods in warm water for bream and bass and in cold water for trout. His journal shows successful trout trips in 19 states – and one unintentionally successful carp trip in Tennessee. He is a member of the Society of American Travel Writers and the Southeast Outdoor Press Association.)

Mike Wattshttps://riversandfeathers.com
Previous articleThe Cure for the Fish-itch
Next articleOf all Places
a Mountain Creek Restored in South Carolina

Toto, We’re Not in Kansas Anymore!

0
Order Your Door Now Due to the Tight Housing Market and Supply Chain Issues One of the most visible...
Read more
Printing

The Stinging Insects of Summer

0
Hornets, Wasps Other Stinging Insects of Summer We sat down with Austin Hamilton the General Manager of Apex Termite...
Read more

0
Buying a new garage door can be intimidating, overwhelming and frustrating especially if you are doing it without professional help.  The first...
Read more
Real Estate

0
High quality townhomes provide a great home option for those who want to live in a specific...
Read more