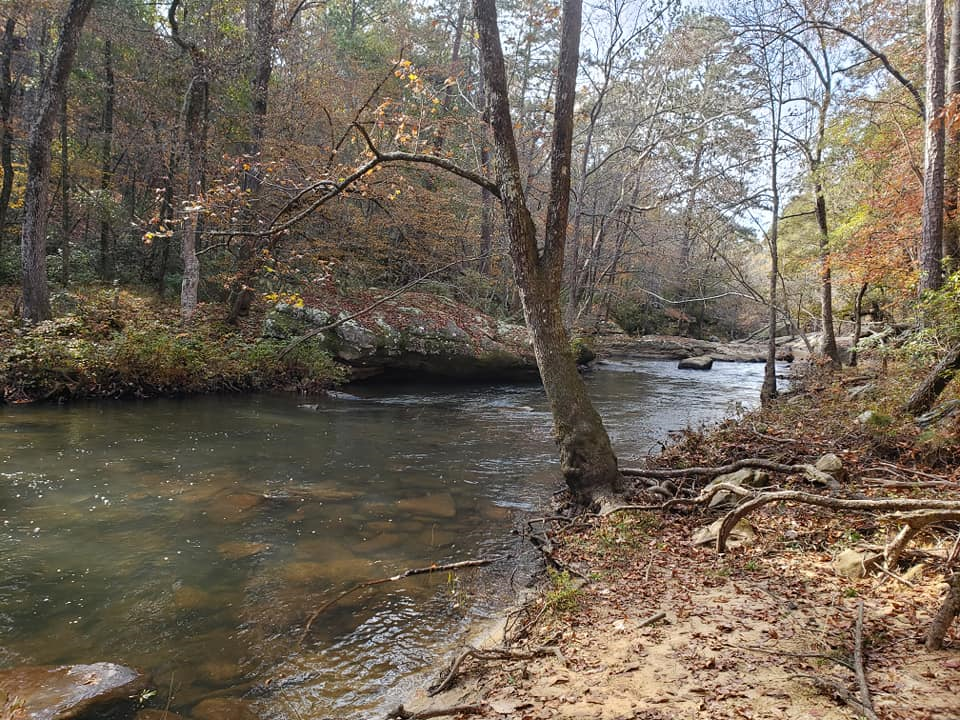 Black Creek flows through Alabama near the town of Gadsden. It eventually runs into the Coosa River. The city of Gadsden, Ala. annual stocks trout in the creek as a public fishery.

A Tennessee Dam Converted a warm stream into a major trout fishery.

Drifting along with only singing birds, chattering squirrels, and striking fish breaking the silence, one could easily believe the Elk River flows through a vast wilderness. Truth is, it courses through populated middle Tennessee.

The Elk River runs 195 miles from Grundy County on Cumberland Plateau into the Tennessee River at Lake Wheeler near Rogersville, AL. Along the way, it passes through Elk River Dam, which creates Woods Reservoir, and Tims Ford Lake near Winchester, Tenn.

Completed in 1970, Tims Ford Dam altered the Elk River ecosystem. In the tailrace, cold water coming from 100 feet below the lake surface began passing through the dam. That cold water changed the relatively warm-water stream into a prime trout river where none existed previously. 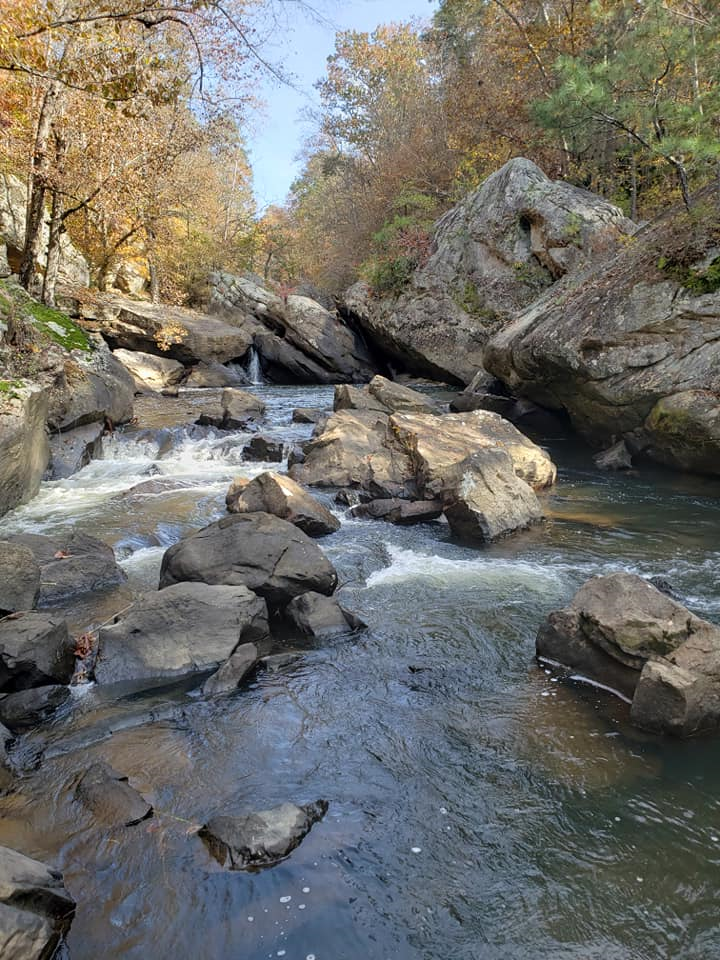 Fly fishermen can find many places to toss a line along Black Creek. The city of Gadsden, Ala. annual stocks trout in the creek as a public fishery.

“That cold water coming off the bottom of Tims Ford Lake took away the first 10 to 12 miles of really good smallmouth waters below the dam,” explained David Perry with Southeastern Fly in Murfreesboro. “That pushed bass farther downstream, but it gave sportsmen other species to catch. We still catch smallmouth and even an occasional largemouth bass when fly fishing, but we mostly catch trout in the first nine miles below the dam. We’re doing more smallmouth fishing every year, but a bit farther down the river.”

“The Elk River is a system where people can catch good numbers of fish with a chance of catching a really nice one,” Perry advised. “We’ve caught some browns and rainbows in the 20- to 25-inch range. They usually weigh from two to four pounds. In 2020, an angler caught a 30-inch brown trout that probably weighed about six pounds. We hear about some 10- to 12-pounders from time to time.”

I joined David and Angela Millet from Lenoir City, TN on a day-long early autumn float trip. We boarded David’s drift boat, a craft specially designed to accommodate a guide and two flycasters, just below Tims Ford Dam at Highway 50. We drifted gently with the current nine miles to Farris Creek, catching browns and rainbows as we went. Along the way, we spotted a variety of wildlife, including a soaring bald eagle. Twice, we even saw mink; animals most people rarely see. The trip included a fabulous shore lunch, provided by Angela.

Rainbow trout are not native to Alabama and can’t survive hot Cotton State summers, except in one tailrace, but the state stocks the fish in selected spots for seasonal public fishing. The city of Gadsden, Ala. annual stocks rainbows into Black Creek, which allows seasonal public fly-fishing opportunities.

“If one is ever inclined to see ‘God’s Country,’ take a drive to Tim Fords Dam and hook up with David Perry for a float trip on the beautiful Elk River,” Angela said. “Rain or shine, it’s beauty all around and a day filled with magical laughs and memories of catching incredible brown and rainbow trout. Bring the net!”

Just beyond the trees lining the banks, watercress farms dot the landscape. Farmers use river water to grow their crops. Several small waterfalls pouring from the fields plunge into the river, making excellent places to cast trout flies. The running water frequently carries bugs and other small creatures that trout devour.

Along the way, currents cut long pools in the river bottom. Sometimes, timber falls into these pools, adding to the fish-attracting cover. Trout drop into these deeper pools and face upstream waiting for the flow to deliver a meal. We drifted small nymphs under strike indicators through these spots. The floating indicators held the feathered temptations just off the bottom as they drifted along with the current. 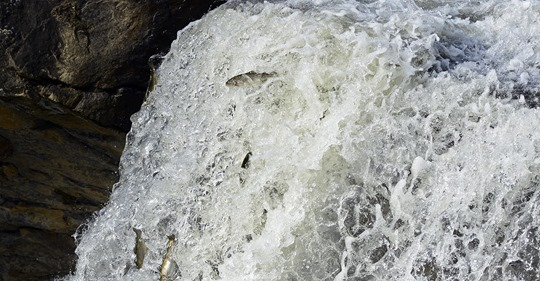 Trout love cold, fast-moving waters. Although not native to Alabama, the state stocked rainbows in several locations for seasonal fishing.

“When nymph fishing, we want it to float along with the current because trout stay close to where the current brings them food,” David detailed. “We do indicator fishing with a nymph, but people can also use various other flies and midges. We want to suspend that midge or nymph just above the streambed because trout stay toward the bottom for protection from eagles and other predators.”

Anglers can fish nymphs under indicators all year long. When bugs hatch and dry their wings on the surface during the summer, dry flies work well. People can also use streamers, which imitate a minnow or other baitfish. Streamers work best during colder months when insects become scarce, 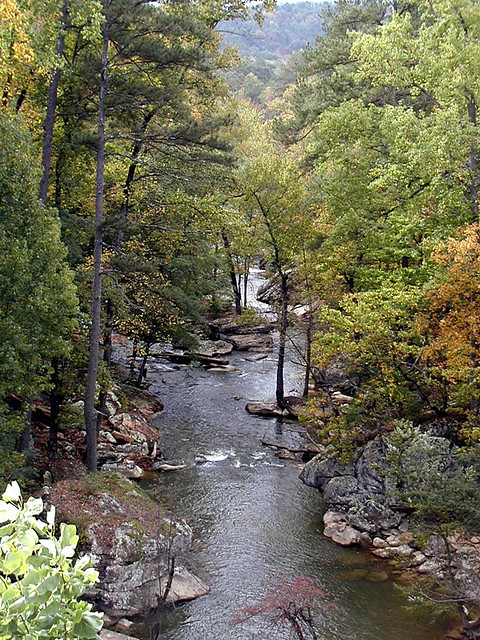 Although we drifted, you can wade near the landing by the dam, or at Farris Creek. Whether wading or drifting, always check the generation schedule at www.tva.com/Environment/Lake-Levels/Tims-Ford.

“The best time to fish the Elk River is when the water comes through the dam from about 240 to 400 cubic feet per second,” David recommended.

Before fishing the river, check with Tim and Rhonda Page at Tim’s Flies and Lies Outfitters (931-759-5058, www.timsfliesandlies.com) in Normandy. There you can learn the best enticements to fish at that time or stock up on other gear. People visiting the area can find food and accommodations in nearby Fayetteville. You can also stay at Tims Ford State Park (www.tnstateparks.com/parks/tims-ford) or Tims Ford Marina (www.timsfordmarina.com).

While in the area, visit the Fayetteville-Lincoln County Museum & Event Center (www.flcmuseum.com) at 521 Main Avenue South in Fayetteville, or grab a slaw burger at Honey’s Restaurant at 109 Market Street East. Many people visit a famous distillery in nearby Lynchburg, but you might also tour Prichard’s Distillery (www.prichardsdistillery.com) near Fayetteville.

To book a trip with Southeastern Fly, call 615-796-5143 or see southeasternfly.com. For more information on Fayetteville and Lincoln County, contact the Fayetteville-Lincoln County Chamber of Commerce and Tourism Bureau at 888-433-1238 or see www.flcchamber.com.

0
Bearing the weight of a global pandemic is incredibly hard.  Many businesses have already been punched, staggered,...
Read more
Uncategorized

The Elements of a Sales Quote

0
The Elements of a Sales Quote Printing and packaging companies differ on many levels so it pays to shop...
Read more