Of all Places
a Mountain Creek Restored in South Carolina 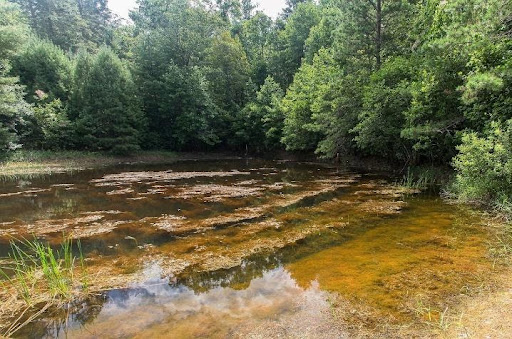 Literally, a few feet south of the South Carolina – North Carolina border, and only a short distance from the Eastern Continental Divide, at least three springs in a mountain bog had been smothered by a pond created by an earthen dam. Neglected, it became plugged and overgrown. The pond, thriving on inattention, became a heat sink, stocked with warm water species and overgrown by thickets of warm-water plants.

The springs constitute the headwaters of Matthews Creek, designated by the State as a premier, cold water trout stream. As the creek tumbles down its high gradient course under dense canopies, it rejuvenates a bit with the aid of several minor tributaries, to gloriously cascade over the 350’ Raven Cliff Falls in Caesar’s Head State Park, a popular destination for hikers and photographers. Its waters continue to flow through pristine lands before joining the Saluda River system, a popular trout fishery, that slakes the thirst of many South Carolina cities and towns, recreates the weary, and invigorates private and public lands before merging with the Atlantic Ocean.

The dam and pond constructed years ago compromised the flora, fauna, and lower riparian stakeholders, as the unmaintained “improvements” were ignored and remained, uh — unmaintained

The dam is to the left; the pond is overgrown.

The restoration was successful because the Natural and Trust, with a grant from the South Carolina Conservation Bank, purchased the tract and established a coalition of diverse conservation groups that provided expertise, labor, and financing.

State and Federal agencies provided critical support and funding, as did local water districts. MBTU and Trout Unlimited made substantial manpower and financial contributions. Once the plan was finalized, numerous permits were obtained, the pond was drained, the dam removed, and the area

graded and stabilized with native plants 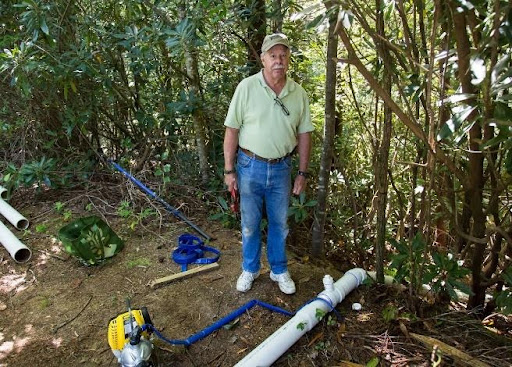 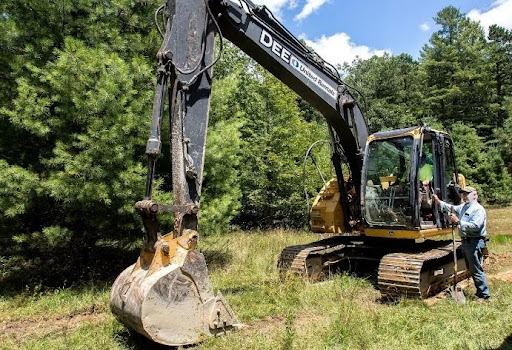 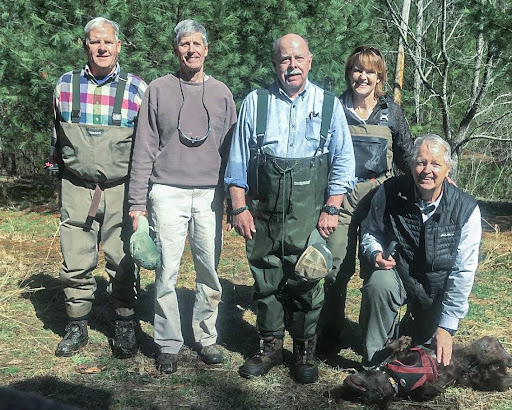 Pure, cold, high-quality water now bubbles from springs on its journey to the ocean.

July 2021- A view of the mountain bog (former pond) from where the dam once stood. Lands have been stabilized with native plants with no erosion. Cold spring water now flows!

The watercourses over 200 miles to the ocean. While proportionally insignificant, but philosophically significant, the ocean receives a few drops of higher quality water. Kudos to Trout Unlimited and all it stands for by restoring clean, cold water to watersheds in decline from July 2021 – Right below where the dam once stood, Matthews Creek, slips under a dense canopy of tangled mountain laurel and rhododendron on its steep journey to the South Saluda River. ill-conceived actions and inactions of a few, to the detriment of all.

David Armstrong is the Legal Advisor to Trout Unlimited’s National Board of Trustees and its Executive Committee, and a long-standing member of the Mountain Bridge Chapter, Greenville, South Carolina. All non-attributed photographs are by the author.

0
By Tom Keer   Fly rodders easily recognize names like Kreh, Pallot, Fernandez, Flick, Beck, and Abrames. Yet for all the...
Read more

0
Have you ever been running late with a car full of groceries trying to get home to prepare for a get together...
Read more
Business

0
Order Your Door Now Due to the Tight Housing Market and Supply Chain Issues One of the most visible...
Read more
Home Design

Q&A With Mr. Jones on Moisture Under the House

0
Mr. Jones thanks for calling us out.  I’ve been under your house and I recommend a moisture...
Read more